Another month has arrived and so the Toledo Tuesdays Gaming Club (info here ) had to muster our steely reserve and tackle another episode of Pandemic Legacy!

Recap: In the first FOUR months, the disease in Asia (i.e. the red cubes) mutated into the non-treatable and incurable COdA virus. In April the virus further mutated into the COdA-403c virus and the afflicted became the Faded, with ground zero for the new mutation in Ho Chi Minh City.  You can get a recap of the April playthrough here.

In May, the number of missions that we had to complete increased from two to three.  We would have to cure the three non-COdA viruses (mandatory mission) and complete two of the following three missions: Eradicate at least one disease, Have a military base in each of the six major regions of the world, or Quarantine 7 Faded cities.

We got some help at the start of May: a new character, The Colonel, and a new action: Build Roadblocks 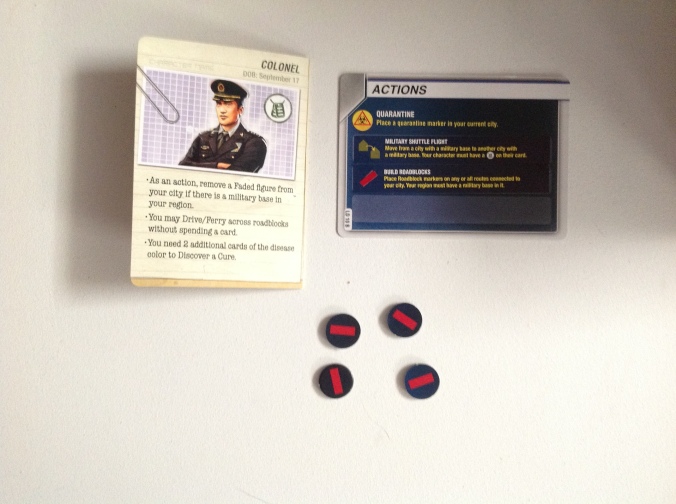 The initial draw of 9 infected cities was typical: a bit Blue, a bit Yellow, a bit Black and a couple Faded.  We figured that we would try to eradicate Yellow (BSNL-419 in our game) while also clearing Black quickly (we have the advantage of Common Structure against Black (we don’t have to be at a research station to find a cure for it).  Given that there weren’t many Faded on the board, we also were going to try to put up the six military bases.  We started with a permanent base in Lima so we only needed to put up 5 more.

Player Choices: So we decided to start at the CDC in Atlanta and take the following characters (in game turn order):

Bob: Researcher (can share cards with other players easily)

Neal: Medic (can treat all cubes in a city)

Stew: Dispatcher (can move everyone around efficiently)

These choices worked very well in April, so we figured that they could get the job done with time two, even though we now had only 4 funded events.  We used our Win Bonus for April to remove one of the Faded from Seoul and we started the game.  Our plan was to treat Blue, Black and then Yellow while channeling cards to the Scientist to cure diseases.  The Medic and Dispatcher would put down military bases as needed while they moved about the globe.  The Researcher and Scientist would stay together (facilitated by the Dispatcher) near one of the research stations.

The game got out of control almost from the start!  We cleaned up a good deal of the Blue cubes on our way to Europe to deal with the Black virus.  The Researcher and Scientist were collecting Yellow and Black cards and we were making progress.  Then we drew an early epidemic in Washington D.C. which was a clean city in the middle of cities that previously had blue cubes but were clear at that time: New York, Chicago, and Montreal.  After we shuffled and put the Infection cards back on top of the Infection Deck we then drew two of the Blue cities near Washington.  We knew we had to stop the Blue virus from getting out of control because if we drew Washington again, outbreaks might get out of control.

While the Medic was in South Africa/Africa dealing with the BSNL-419 virus (Yellow) and the other players were in Eastern Europe tackling the Black virus, this Blue contagion forced us to divert back to Northern America.  And that’s when things really got out of hand!  As we cleaned up the Blue virus the Black virus cards came out and Moscow burned!  We had already lost a permanent research station in Moscow back in February and now the Panic Level in Moscow moved from 2 to 3.

Yikes!  The Dispatcher tried to get most of us back into Eastern Europe while the Scientist gathered cards to cure the Black disease.  But then the 2nd Epidemic Card was drawn: Istanbul!  Oh no, right near Moscow!  Outbreaks started and Moscow went up to Panic level 4!

Well, any seasoned player of Pandemic knows that once you start letting outbreaks happen, they can multiply very quickly…and that’s exactly what happened.  While we cured the Black virus, the BSNL-419 came back to bite us.  Johannesburg was too far in the Southern Hemisphere for us to get to it, and it had an outbreak.  Then Washington did too!  We couldn’t find any event cards, got overwhelmed and lost on the 8 outbreak rule.

Here is a photo of how the game ended:

The Ugly End of Our First Attempt in May

Because of our victories in previous months, there were NO, that’s right NO, panic levels in Northern America or Southern Africa.  It might be hard to make out on the map, but Washington is now at a 2, New York 1, and Johannesburg 2.  Add the 2 new levels in Moscow and that’s 7 of the 8 (I think Istanbul was the other outbreak).

Everything went wrong: we couldn’t get enough cards into the Scientist’s hand quick enough, the Medic was running around putting out fires but never in front of the diseases, the Researcher drew too many Red cards, nobody could draw events, and the Dispatcher did the best he could to move us around but the epidemics were too far spread out.

The irony is that for the second month in a row the Faded had basically no effect on the game.  We did quarantine two Faded cities and that helped keep the Faded in check, but really we didn’t draw any Red cards in a manner to cause us any problems.

At the end of the first game in May, the players can open door 8…and so we did.  This allows for permanent roadblocks to be placed as part of the Endgame upgrades.

For our two upgrades we chose the following:  the Researcher and Scientist would be “Family Members” so each would get an extra action when each started in the same space as the other, and the Dispatcher would now be a Veteran and be able to take the Military Shuttle Flight action between military bases.

We moved our Funded Event total up to 6 and now we are ready to try again later this month to win in May.

2 thoughts on “Pandemic Legacy May Playthrough”