Recap: In the first six months, the disease in Asia (i.e. the red cubes) mutated into the non-treatable and incurable COdA virus. In April the virus further mutated into the COdA-403c virus and the afflicted became the Faded, with ground zero for the new mutation in Ho Chi Minh City.  We suffered a crushing defeat in our first attempt at the May episode as Moscow melted down, while the Blue and Yellow viruses spread like wildfire across the Americas and Africa.  Outbreaks came at lightning speed and we lost due to the too many outbreaks rule.  In a heroic effort in the second episode of May, we triumphed and kept the diseases under control.  A rather lucky draw of cards in June allowed us to triumph in our first attempt.  But now the government was barely funding events, so July looked to be a tough month.

At the start of July we got a new mission: search for the Virologist.  It seemed that a virologist was missing and that we had been assigned to find her.  We needed to “Search” (spend an action and a matching color card) at research stations and to do it quickly.  Each time an Epidemic card was drawn, the search for the Virologist would get a little bit longer.  Other than that, the missions were the same: complete 3 missions, with curing 3 diseases being mandatory.  Then complete 2 of the following: eradicate 1 disease, put up a military base in each of the 6 regions, and find the virologist.

We went through the normal set up steps and here is what the board looked like just before we began: 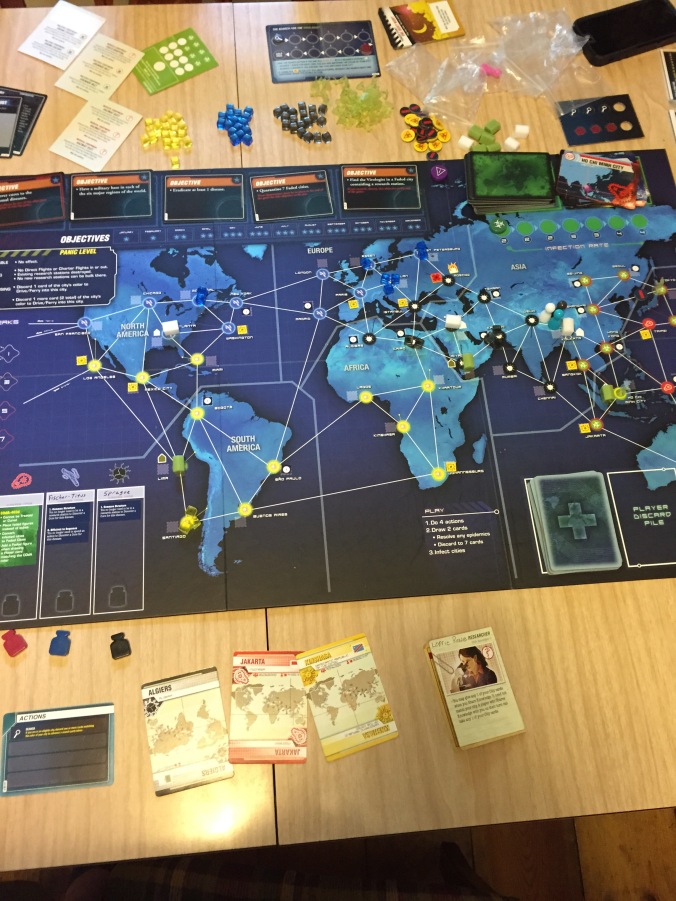 The start.  We are all in Kolkata.

Lee was out this week, so it was just the 3 of us.  We looked at the board and we made some key decisions.  First, we had only 2 funded events, which meant that epidemics would be drawn pretty quickly on top of each other. We realized that our odds of winning were slim so we wanted to get something done that would have a permanent effect–even if we lost.  Two, curing diseases and eradicating one of them would be our secondary priority.  We have plenty of favorable mutations upgrades which might help us achieve these objectives.  Three, we really wanted to find the Virologist, so it would be the top priority.  We figured that whatever bonus came with finding her would be helpful in a later game.  Four, we would only try to place military bases if that option looked good given our initial card draw.  We placed our June win bonus blockades in a way to stop the Faded from moving to Shanghai (see below why we chose this) or spreading to North America.

So, here are our character choices in turn order:

We decided to start in Kolkata.  The idea was that the Operations Expert would go to Shanghai, drop a research station, and then use his Shanghai card and other red card to get a quick jump on finding the virologist.  The other two would work on curing diseases.

Well my droogies, guess how this game turned out?  About as bad as it gets!  It was so short that I will break it down in player turns.

Stew’s 1st turn: he moved to Shanghai, placed a research station and quarantined the city.  His first card drawn was an Epidemic!  And in Lima, right next to the 3 cubes in Santiago!  And when drawing the 2 cards from the Infection deck, Karachi had an outbreak.

Bob’s 1st turn: he handed off some cards to the Scientist and then went to Shanghai to help the Ops Expert.  Then he drew Milan from the infection deck and now we had our 2nd outbreak.

Neal’s 1st turn: he flew to Atlanta and then dropped a military base in New York.  This was our 4th base as we started with 3 permanent bases in Lima, Riyadh, and Ho Chi Minh City.  Then he drew the Santiago infection card, so that was outbreak #3 and Lima had a chain reaction outbreak for #4.

Stew’s 2nd turn: Ops Expert builds a military base in Shanghai, our 5th.  By this time, we knew that we were in big trouble given the number of outbreaks on the 1st round.  We decided that we would try to find the virologist and find places where we might want some permanent military bases.  The Ops Expert then searched for and found the Virologist.  Which to our surprise did NOTHING to help us.  Or at least nothing right now, we assume that her finding of the gene sequence for CodA will be helpful in a later month.  Anyway, during the infection step he drew St. Petersburg which had an outbreak #4, leading to a chain reaction outbreak in Essen #5, and then in Milan #6.

Bob’s 2nd turn: By this point we were doomed.  We struggled to find any actions for the Researcher that had any positive  impact.  But we did figure out that if he put a military base in Lagos, maybe we would want to make it permanent during the endgame upgrades.  So he traveled to Lagos and dropped a military station there, completing our 2nd optional mission.  But the end was near.  Why?  Because he drew Lima from the infection deck which had an outbreak #7 and Santiago had a chain reaction outbreak #8 — Game Over!

Neal’s 2nd turn: never got it!  So sad! Yeah, that’s right, your faithful narrator Neal only got 1 turn!  How very sad me droogies!

Here is a pic of the debacle:

End of the game.  Note the successful “Search for the Virologist” card at top.  Also see the Lima-Santiago outbreak factory and poor Europe overrun with disease!

We moved the funded event total up to 4 and now we are ready to try again in a couple of weeks.

By the way, the Faded have literally done nothing since they arrived in this game.  They have almost never been on the board and have never been the source of an outbreak across 4 months now.  Very strange.