IF YOU HAVE NOT PLAYED THE OCTOBER EPISODE OF PANDEMIC LEGACY YET, DO NOT READ THIS BLOG UNTIL YOU DO. PLENTY OF INFORMATION ABOUT THAT THE EPISODE IS REVEALED HERE.

Recap: In the first nine months, the disease in Asia (i.e. the red cubes) mutated into the non-treatable and incurable COdA virus. In April the virus further mutated into the COdA-403c virus and the afflicted became the Faded, with ground zero for the new mutation in Ho Chi Minh City.  We suffered a crushing defeat in our first attempt at the May episode as Moscow melted down, while the Blue and Yellow viruses spread like wildfire across the Americas and Africa.  In a heroic effort in the second episode of May, we triumphed and kept the diseases under control.  A rather lucky draw of cards in June allowed us to triumph in our first attempt.  But now the government was barely funding events and in our first attempt in July we lost so quickly that one of the three players didn’t get a second turn! We did however find the Virologist.  In our second July attempt we managed to triumph despite long odds.  In August, we had an unlikely victory and found the Immunologist. In September we found the Paranoid Solider and learned that we had been duped!  A mysterious organization known as Zodiac instigated the COdA virus in order to control the world.  Now we would have to dismantle the oppressive military state that we helped to build up.

We read the mission briefing and discovered that we were to find Patient Zero! 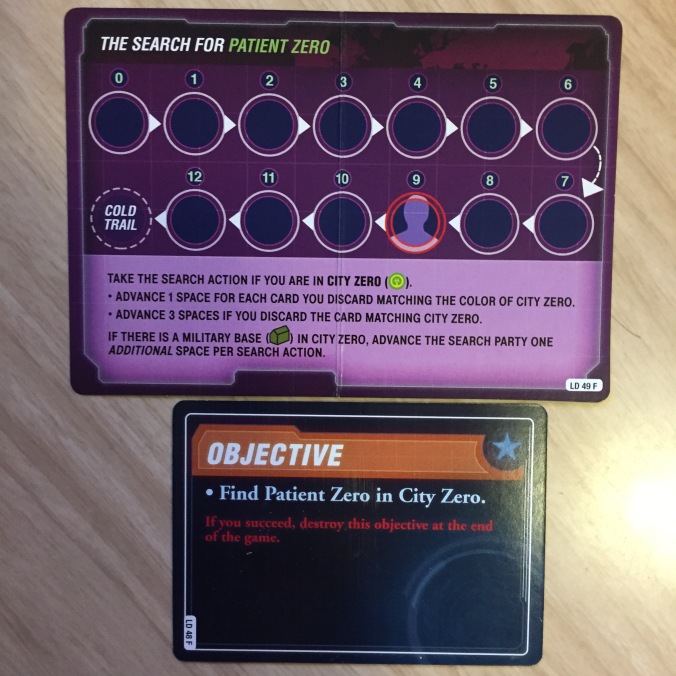 The Search to find Patient Zero

Per the new rules, we randomly added a new military base in San Francisco.  We completed the routine set up and then picked our characters.  Because we had zero (yes zero!) Funded Events, we felt it an imperative to find Patient Zero.  We expected to lose the game this month so Neal took the Soldier and Bob took the Ops Expert so that we could quickly complete the Patient Zero mission.  Lee took the Medic so that he could treat cities and buy the rest of us more time.  Stew would be his usual Dispatcher and move pawns around.  After selecting characters, we decided to start in Kolkata and then we used our September Win Bonus to put some Binoculars on the Jakarta Card.  We randomly drew pawns and Stew would be the first player (again!  He has all the luck!).

Dispatcher — Moved to Ho Chi Minh City (City Zero) and then dispatched the Ops Expert and Soldier there.  He then drew the 1st Epidemic card and Riyadh exploded with the Sprague (Black) virus.  We moved the search track from 9 to 10.  We drew an infection card and it was…wait on it…wait on it…Riyadh!  Outbreak #1!  The other was Beijing (Faded went from 2 to 3).

Ops Expert — Bob put down a military base in Ho Chi Minh City and then searched for Patient Zero.  We moved the Search from 0 to 2 (+1 Tokyo card–which by the way has an equipment sticker on it, +1 military base).  He discarded the Tehran card and flew to Baghdad (Ops Expert ability) and treated 1/3 cubes.  He drew the Ho Chi Minh City player card so 1 Faded joined the Soldier and Dispatcher in City Zero.  For infection cards he drew Taipei (1 to 2) and San Francisco.  Boom!  Outbreak #2!  The non-COdA viruses were getting out of hand pretty fast.

Soldier — He didn’t get a scar because, well, he is the soldier!  Anyway, he picked up the Tokyo card from the discard pile and then searched for Patient Zero.  We moved the search from 2 to 4 (+1 Tokyo card, +1 military base).  He then picked up the Tokyo card again from the discard pile and searched again (search 4 to 6)!  Cheesy?  Yes!  But effective use of the Soldier’s ability to pick up equipment.  For infection cards, he drew New York (Boom! Outbreak #3) and Bogota (1 to 2).

Medic — Moved to Ho Chi Minh City and searched with the Jakarta card with Binoculars!  Moved search from 6 to 10 (+1 Jakarta card, +1 military base, +2 Binoculars).  And Objective #1 is complete and we found Patient Zero!  Because we now had the DNA, Gene Sequence, and the Records, this led to a opening Box #7 and a whole bunch of stuff.  I will save all that for the end of this report.  Anyway, the Medic moved to Hong Kong to finish his turn.  Faded/cubes were added to Baghdad and Bogota by draws from the Infection deck. 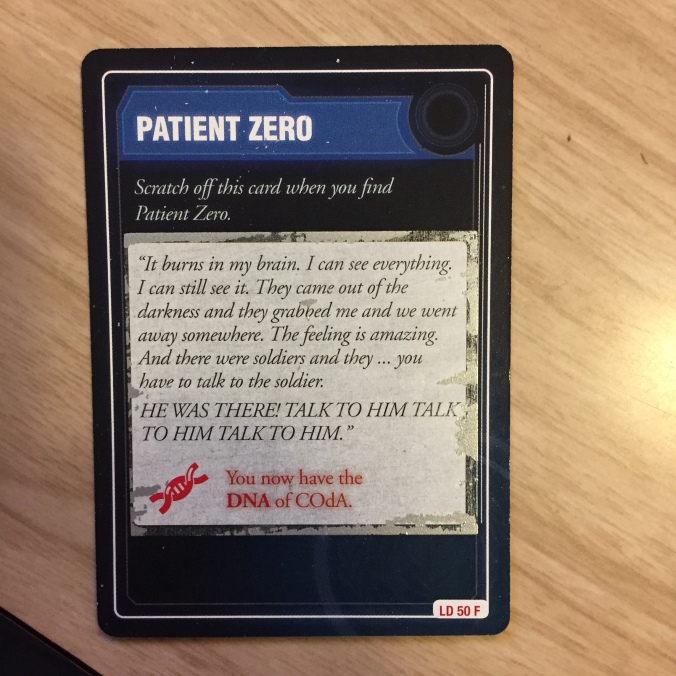 Dispatcher — He got a scar from being in Ho Chi Minh City with the Faded.  Stew took the Indecisive scar.  He dispatched himself to Baghdad, moved to Tehran and treated 2/3 cubes.

Ops Expert — Moved to Riyadh and discarded the Riyadh card to Sabotage the military base there.  He then treated 2/3 cubes in Riyadh.

Soldier — Picked up the Tokyo card from the discard pile and moved to Tokyo.

Medic — Moved to Ho Chi Minh City and used C4 (no action needed) to Sabotage the military base there.  Objective #2 (Sabotage 2 military bases) complete.  Now only the mandatory mission remained.  He then moved to Kolkata and flew to Baghdad.

At this point we were struggling because we only had a single Black card between all 4 of our hands and realized that we probably wouldn’t complete the mandatory mission.

Dispatcher — Dispatched himself to Tokyo, grabbed the Tokyo card from the Soldier.  You might remember it has an equipment sticker and that sticker is the Induced Pluripotent Stem Cells.  The Dispatcher cured Fischer-Titus (Blue virus) without an action and then flew to Baghdad and treated 1/3 cubes.  He drew Epidemic #2 in St. Petersburg.  He then drew Mumbai (Outbreak #4).  We were rapidly running out of Black cubes to put on the board.

Ops Expert — Moved to Baghdad by discarding the Ho Chi Minh City card.  He treated cubes and then with his last action equipped the Parachute sticker on the Algiers card.

Soldier — Took a direct flight to Chicago, treated 1/1 cubes there, moved to San Francisco and treated 3/3 cubes.  Then he drew Epidemic #3 in Delhi.  The first infection card drawn was Mumbai (Outbreak #5) which led to chain outbreaks in Delhi (#6), Karachi (#7) and Tehran (#8) and the game was lost!

Here is the board at the end of the game:

A Panoramic photo of the board at the end of the game.

Because we collected everything necessary to open Box #7, the game changed as we now had access to a vaccine to stop COdA. 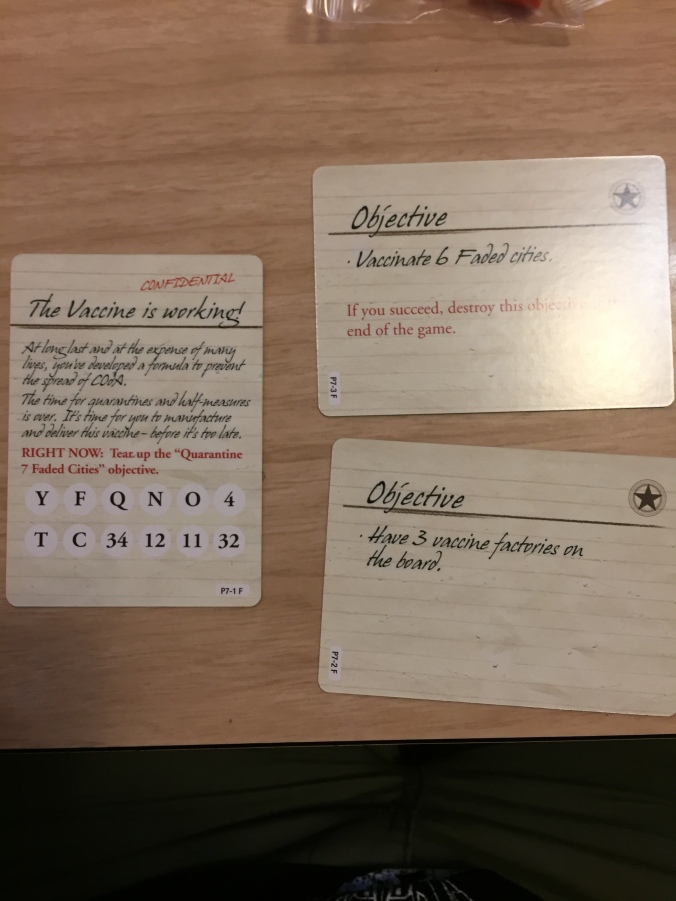 The Vaccine is found!

By finding a vaccine, we now had two new objectives: Vaccinate 6 Faded cities and have 3 Vaccination Centers on the board.  We were instructed to put all kinds of new stickers in the rulebook to simulate the new vaccine rules.  We also got some cool orange buildings and doses. 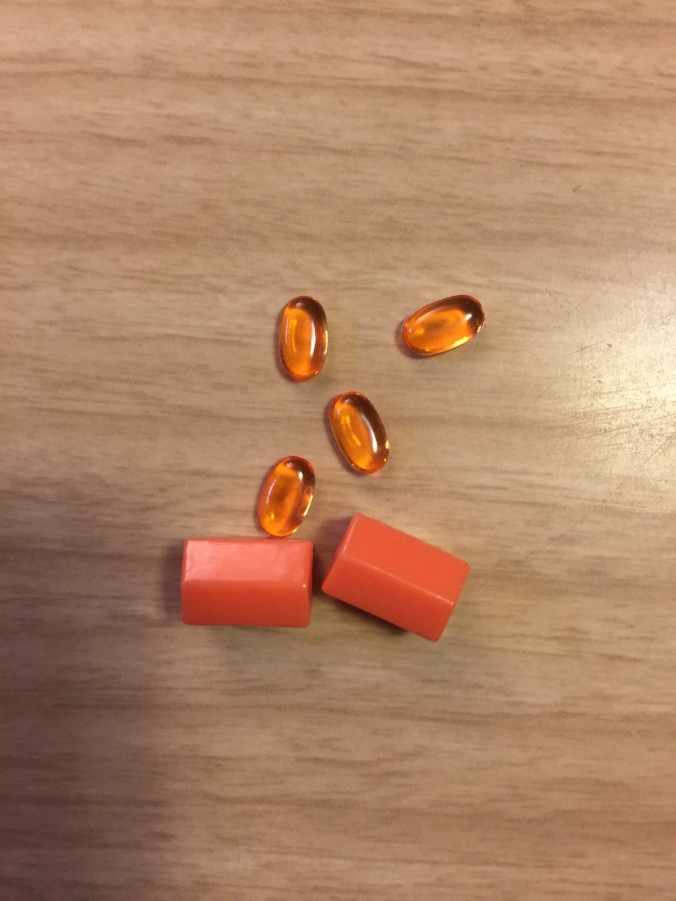 And when you vaccinate a Faded City, you put a Vaccination sticker over it! 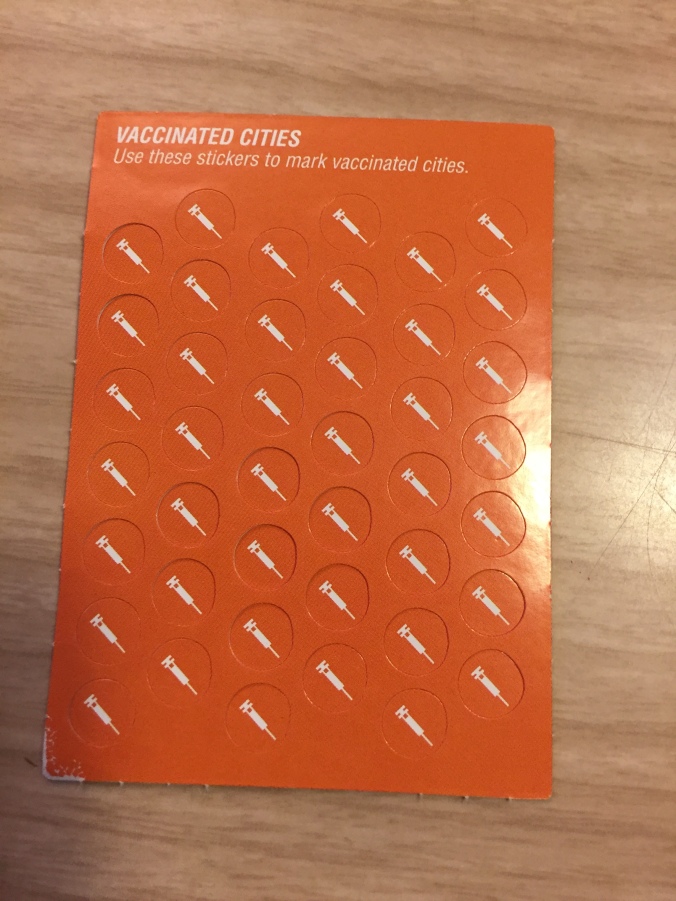 Also, the Immunologist is now a character choice. 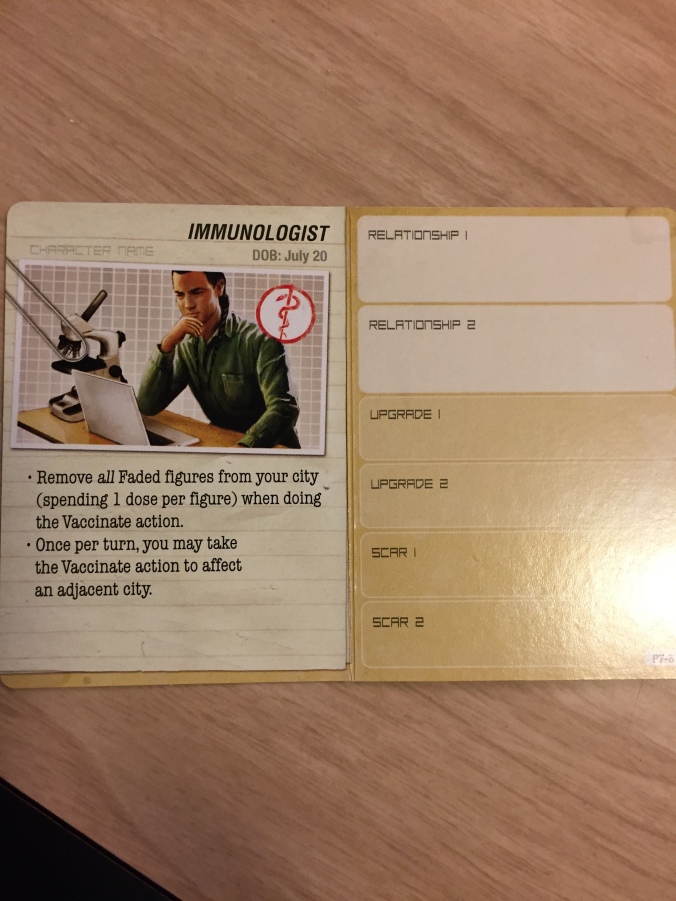 We moved our Funded Event total up from 0 to 2 (yay!).  We used both upgrades to put 3 equipment stickers each (so 6 stickers!) on red cards.  We added all 3 of the new Bioreactor (discard to produce 3 vaccine doses) and all 3 of the Aerosol Unit (use one dose to remove all Faded in a city) stickers.  At this point the entire Top Secret dossier was exhausted.  I guess the only twists and turns left must be in the Legacy Deck.

Because we lost we will have to tackle October again.  But…somehow we felt that we won anyway because now we would be armed with Vaccination centers!