One Deck Dungeon.  One should notice that all the heroes are female!  And none of them are half-dressed.  Clearly this is a good sign as this game does not invoke the Inverse Rule of Gaming (i.e. the more female flesh used to sell/promote a game, the worse that game must be)

One Deck Dungeon is a “co-operative dungeon delve for one or two players,” (and if you combine 2 sets, 4 players).  In short, it’s a game in a small box that promises a D&D like quest in a short period of time, for a small amount of money.  Does it deliver?  Read on and find out!

One Deck Dungeon: Descend through the Dungeon Floors and Defeat the Boss

The basic idea of ODD is that the hero or heroes fight their way through 3 dungeon floors, each harder than the one before it, and then encounter the boss monster at the end.  Along the way, you grab items, skills, and experience to make the heroes tougher so that they can defeat stronger and stronger monsters.  The random element in the game comes in two forms: random selection of cards and dice rolling for combat and peril encounters.  If the heroes make it all the way to the boss and defeat it, they win; otherwise they lose.

Contents of the Game

The quality of the components is quite high.  The rules booklet is clear and edited well.  It explains the rules twice, once with helping pictures, and then in the back of the book it re-lists the rules in a text-only format.  The front section helps you learn the rules while the back section performs as a “quick reference” to look up rules questions.

The cards are printed well and have good art on them.  The reproduction of the colors on the cards match the dice (more on this later) very well.  The cards can be shuffled easily and do not appear to wear quickly.  Also, the cubes and dice are of high quality and will stand up to a lifetime of playing.  The game box is sturdy and has a handy divider to separate different sets of cards when storing the game. Overall, I am fairly impressed by the quality of the components.

One Deck Dungeon is a quite easy game to learn and play.  A play picks a Hero and places the Hero card in front of herself/himself.

A Hero Card.  The Warrior will roll 4 Strength dice, 2 Agility dice, and only a single Magic die.  She also has 6 health.

The Hero card shows how much Strength (yellow swords), Agility (pink winged shoes), Magic (blue diamonds) and Health (red hearts) each hero has.  It also lists their Heroic Feat (in a blue scroll) and beginning skill (tan scroll).  The player/s choose a Dungeon/Boss card.  One side of this card provides information on the 3 floors of the dungeon while the back side has the Boss encounter. 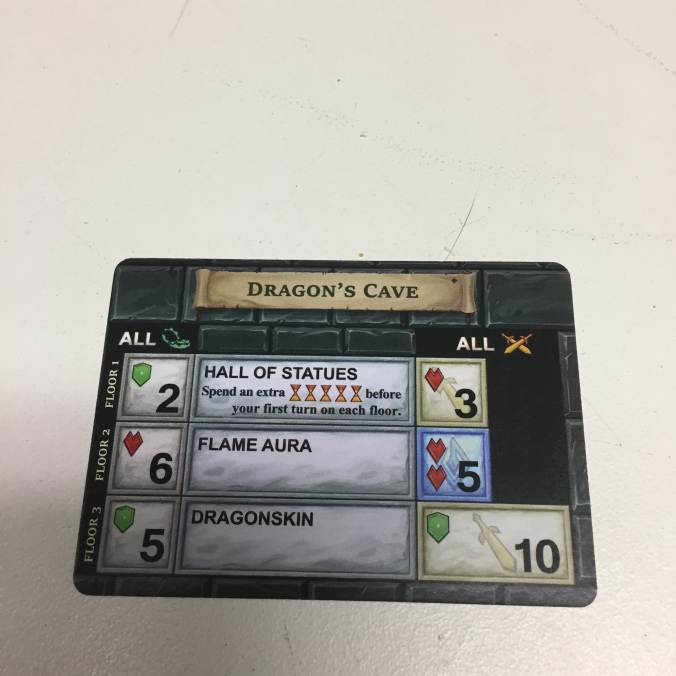 The Dungeon side of the Dragon card

The Boss side of the Dragon card

The Turn Reference Card.  Note the Dragon’s Cave dungeon card at the top with its challenge boxes for the 1st floor exposed.

Stairs card (on 4-player side) with stack of encounter cards

At the start of each turn the player burns 2 encounter cards (reveals and discards them) to represent time (depicted as hourglass icons) spent wandering the dungeon.  Then, the heroes may either 1) open 1 of the closed doors and fight or flee from it,  2) encounter an already opened door, or 3) “Explore” which adds cards off the top of encounter deck as closed doors up to a maximum of 4 total doors (open and closed combined).

Encounters are either “combat” or “perils”.  And this is where the fun in ODD truly exists!  Each encounter card has a set of challenge boxes.  Each box is color-coded toward one of the player attributes (strength, agility, magic, or “any”).  The player must use rolled dice to defeat the challenge boxes by placing rolled dice into each box equal to or greater than the listed number.  Moreover, the hero must also defeat the challenge boxes listed on the Dungeon card for the current floor and each floor already completed (e.g. if the heroes are on floor 2, they must complete all challenge boxes for floors 1 and 2.

The two different types of encounters: Combat on top and Peril on bottom.  Note that the Peril encounter allows a player to choose which challenge box to face.  The left column of the card is its loot as an “item”, the bottom scroll is its loot as a “skill” or “potion recipe” (the top card has a skill, the bottom a potion recipe), and the lamps on each card are the loot as “experience.”

If the encounter is combat, the hero/es roll all possible dice (i.e. all strength, agility, magic, and heroic) while if the encounter is a peril, the hero/es roll only dice matching the challenge attribute plus any heroic dice.  At this point the hero/es may also use skills to increase the likelihood of defeating the challenges (e.g. turning a die from a 1 to a 6, rolling more dice, etc.).  Note that the players may transform any two dice into a single heroic (i.e. black) die of value equal to the lower consumed die (e.g. a blue 3 and pink 5 transform into a single black 3).  The value of this is that heroic (i.e. black) dice can be placed on any challenge.

Fighting a Shadow.  Because the blue 5 challenge box is not covered, the hero will take 1 point of damage (the heart) plus 1 time goes by (i.e. 1 card from the encounter deck is discarded).  Notice also how the player’s dice had to cover the challenge box on the Dungeon card too (the right side column has peril boxes and the left side column has combat boxes).

The hero/es place dice until they either defeat all challenge boxes or cannot place any more dice.  Any challenge boxes not defeated list a penalty in either damage or time, and each undefeated box inflicts its penalty on the heroes.

Once the encounter is over, the heroes take the encounter card (whether completely defeated or not) as “loot”.  Each card can be taken as an “item,” which adds to a hero’s attributes and thus allows more dice to be rolled, as a “skill,” or as “experience,” which contributes to leveling up.

Should the hero/es survive past the 3rd floor they face the boss!  This is a multi-round combat similar to encounters.  It lasts until either the boss suffers damage equal to its health or the hero/es all die.

The rules are easy to understand, so players can get started right away after reading the booklet.  However, I found that I made some mistakes in my first couple of games that made me start over.  The most common mistake is that once you reach the maximum number of items and skills, you can replace any of them with any new encounter card.  The old item/skill gets transformed into its experience.  It is easy to forget this rule, but once you remember it, it really comes in handy.

Anyway, the game plays pretty fast.  Basically, you burn 2 cards, encounter a card, roll dice, choose how to distribute them to defeat the challenges, get the loot, rinse, lather, and repeat.  Once you reach the stairs, you shuffle and do it again.

The game play is nicely calibrated.  Some encounters are fairly easy but do not reward you with much loot, while others are best avoided until the hero/es get stronger.  Moreover, sometimes it is best to try an encounter, even if you cannot cover all the challenge boxes, just to get the loot.  You may take some damage, but it can be worth it for a great skill or an item that you need to boost an attribute.

Moreover, as you descend the number of challenge boxes on the Dungeon card multiplies and get harder.  Thus, a goblin on the 3rd floor is going to be much tougher than a goblin on the 1st floor.

There is also a bit of depth and strategy. Do I try to get xp and level up, or should I beef up skills and items first?  Should I loot that encounter for the Magic item that I need, or take it for that sweet skill?  Do I want to cover a challenge box that causes me damage or that burns time?  Do I use that potion to heal now, or save it in case I find a better potion recipe later?  There are plenty of choices to make that do not have a dominant strategy in each and every instance.  Sometimes a choice looks good but later you wish you had done something different.  The mechanic of replacing chosen skills/items with new items does allow the player to make up for poor choices, but only after consequences of undefeated challenges are inflicted.

I use a rating of 1-10 “Dice” for each category.  For reference, a 1 is the poorest possible rating and a 10 the best possible.

The quality of the cards, dice, rules booklet, cubes, is top notch.  My only gripe, and it is a minor one, is that some of the challenge boxes are too small for multiple dice.  For example, the Dragon boss has boxes of 16 or 17.  The player must use multiple dice to defeat the box, but the box only accommodates 2-3 dice.  Well, that just isn’t big enough.

This is a solid solitaire and 2-player game (I did not play the 4-player variant as I do not have 2 decks).  The pace is quick, it doesn’t have complicated rules to distract the player, it feels like a dungeon crawl, and the rolling/distributing of dice is easy.  Moreover, you really get a sense of fighting monsters and dodging traps.

As mentioned that are choices to be made, and they do matter.  Also, each boss has a different set of challenges in its dungeon plus different challenges in the boss encounter, making each game different in the strategy that must be pursued.  However, there are not enough encounter cards to truly vary the play enough to my liking.  Note that there is a Kickstarter campaign for a new set of cards, which might take care of this issue.

You can lose early with a really tragic roll (for example, more than half 1s and 2s on your dice before you get enough skills to change the die rolls) but generally you will be “in” the game and have a chance to win.  If you don’t prepare for the boss, you will lose, but if you prepare you have a good shot at winning.  The 1.5 version of the game has made leveling up slightly easier which has alleviated the imbalance favoring the dungeon in the original version of the game. (Note: all product at Asmadi Games is now v1.5).

The game delivers on its promise: it feels like a dungeon crawl simulated through only 1 deck of cards.  However, because of the minimalist nature of the game, there is a natural limit to how much the theme can actually come through.  I think future expansions can probably expand on the theme through more mechanics, flavor text, campaign adventures, campaign settings, etc.

This is a solid, solid game.  Unlike small box die rollers put out by Gamelyn Games that lend themselves to analysis paralysis, ODD does not.  The number of skills that change the die rolls/add dice/etc are minimal, allowing the player to determine the best course of action quite quickly.  Yet, picking which encounter to face, which skill to use, how to take loot, etc., is not always straight-forward, bringing a strategic element into the game.  The pace is good, the theme is spot-on, and there is even a campaign format for those who want more depth.