Yesterday I turned my attention to completing my Folded Space game box organizer for Scythe (FS-SCY available here) which I bought for about $30. My recent Folded Space projects [ Near and Far, 7 Wonders, and Eclipse] went well, so I hoped this project would too.

Now…if you have ever played Scythe, you know that the game contains a bunch of cards, resource tokens, coins, boards, player pieces, mechs, etc. Do knowledgeable fans want to guess what my Scythe box looks like on the inside?

— My box of Scythe when I take off the lid. Not so bad…

— but this is what it looks like after I remove all the faction/player boards! What a horror show!

I spent about two hours yesterday putting together my Folded Space game box insert. Here is what some of the components look like:

— putting together the organizers

Everything came together pretty well (except for when my kitten George jumped up on the table, I had to re-glue one piece). Then I started the task of dumping pieces out of plastic bags and putting them in the freshly made bins.

It took more time to find all the pieces and get them out of the bags then it did putting them in the new bins.

— the bottom row. The faction boards are on the far right 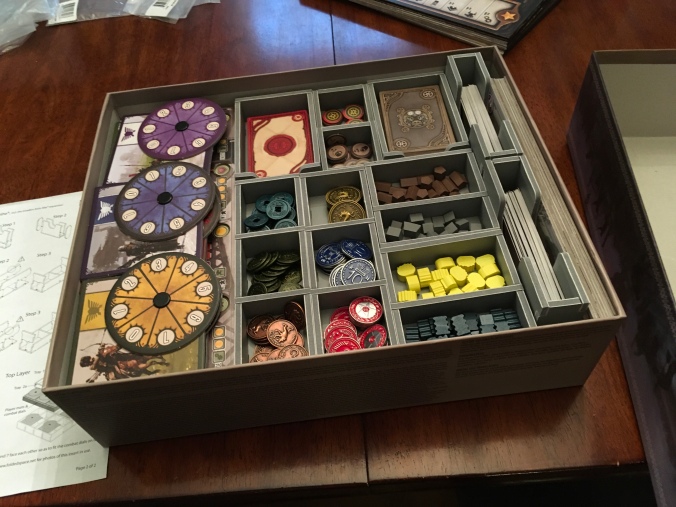 — the top row. The player boards are below the dials. The combat dials kind of don’t fit right and sit above the rest of the organizer.

My box of Scythe is much better organized than before, but…

…the lid doesn’t close. The combat dials sit up too high in the box. Also, once I put the boards into the box, there is no way to completely put on the box lid. The lid sits up by a bit.

— the dials and the boards force the lid up so that it doesn’t completely sit on the box bottom.